Cannabis Retailers Near You

We are proud to partner with VCG

We are committed to serving our community by providing excellent services for clients and reliable jobs for skilled candidates. People Need People seeks to nurture accountability and reliability in the cannabis workplace. The demanding task of managing a labor force can be overwhelming for businesses; we’re here to help.

Have you filed your service connected disability compensation claim?

The VCG strongly advises that you, the veteran, use the VA services and file for the benefits you are rightfully entitled to receive.

“If you are a veteran who is struggling, let the VA help you.I know what it’s like to try and do it all on your own. Sometimes that only takes you so far and you need some help. Connecting with the VA is one of the best decisions you can do for yourself to help you transition and be successful from the military world to the civilian world.”

Cannabis Therapy Getting Healthy, Not High

That we have an Endo-Cannabinoid System (ECS) was only imagined in the early 1990’s. We now know that it is our foundational internal homeostatic regulatory system, involved in almost every physiological process. Its presence is everywhere.

Our mission is to support the growth and healing of veterans through mutual assistance, personal development, and community service.

Hiring Combat Veterans successfully is a smart business move, which allows companies to maximize profits by getting access to unique skill sets and training that military veterans bring to the table.  Vets 2 Work provides training, consulting and leadership around the process of hiring veterans.

If you are a Veteran in crisis or know a Veteran who is, confidential support is only a phone call, click, or text away — 24 hours a day, 7 days a week, 365 days a year. 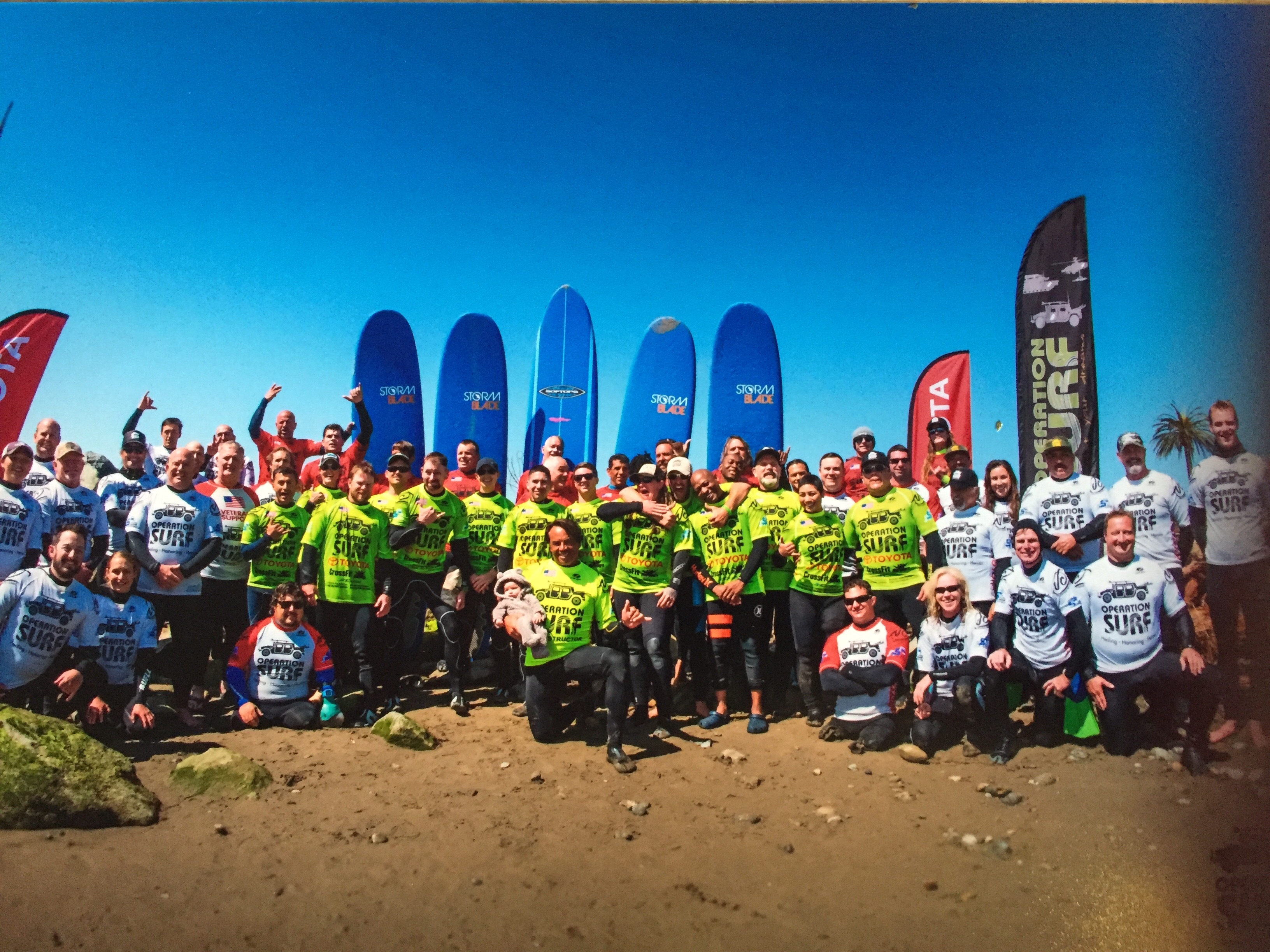 Amazing Surf Adventures (ASA) develops community programs which utilize surfing, along with other activities, to help individuals change their perspective and overcome their personal challenges.

We value the right of the individual to lead a happy, productive life. We are dedicated to providing opportunities for veterans and those struggling with physical and mental disabilities to reach their full potential, accept their past, and overcome their perceived limitations through our programs.

“Let’s talk about Operation Surf and the absolute amazing time I had with them! This trip was one for the record books, a trip you don’t want to miss..! The veteran appreciation felt from the volunteers and the community of Santa Cruz, CA was awesome! Thank you to all the veteran organizations that are involved.

My experience with Operation Surf was very connecting in a personal way. Van Curaza, the President & Founder, achieved a stellar vision of comradery, spiritual connections, healing and cleansing of the spirit while having a blast surfing the waves of beautiful Santa Cruz County.

I’d like to tell a little story of learning to surf the hard way. My attitude at the time was a bit reckless and ignorant to the real dangers of surfing in the North Pacific Ocean because I had recently returned home after being in the hostile city of Mosul, Iraq for seven months during Operation Iraqi Freedom.

After returning home from this life changing experience, I moved to Marin County, CA and began my readjustment into civilian life… Shortly after enrolling in the local community college for only three weeks, I dropped all my classes, bought a surfboard and self medicated with cannabis for months. This was my first real surfing experience and I definitely felt the power of the ocean as I fell again and again into the unforgiving waves.

I just had the attitude that of, “Hey, I just got back from the war in Iraq, what’s the worst that can happen. I’ll just fall into the water, right?” Hahahaha… Well, as I know now, a lot can happen out there. The ocean is to be respected and not a place to be complacent or have a reckless attitude.

How I wish I could have found Operation Surf back then as the amazing surf instructors and water safety volunteers would have prevented me from getting pounded by the Pacific waves at Fort Cronkite, Rodeo Beach….

Thank you very much for your dedication and time spent with me and all the other veterans who come through Operation Surf!

Being around the other veterans who were seriously injured while deployed was an absolute eye opener, source of inspiration and strength, and overall appreciation for being home and alive! I have searched for the commodore that all veterans can relate to while serving, and I found it for sure at Operation Surf, shack aaaa !!!! This trip also confirmed my mission with the Veterans Cannabis Group as I met several disabled service connected veterans that use cannabis medicinally. Some of whom have lost limbs during combat operations in Iraq and Afghanistan. It doesn’t take a doctor to see that cannabis helps when you meet a veteran who was taking ten prescription medications from the VA and is now down to zero in a matter of just weeks by using medical cannabis. Or other veterans who become addicted to the opiate prescribed pills who now use the healthier alternative of medical cannabis to help with their issues. Or testimony from a veteran I met that uses cbd strains of cannabis that help reduce his seizures he suffers from after being hit by an Improvised Explosive Device (IED) while deployed. Why is the VA not prescribing medical cannabis to our veterans? You would think after serving your country, and like some, losing your limbs in the process, or being mentally stressed out and returning with PTSD, that you have maybe earned the right to decompress and relax in a healthy non-toxic way with medical cannabis…?

I will forever promote, volunteer and hold a place in my heart for everyone involved with and support of Operation Surf!

The San Francisco VA veterans and Dr. Straz, along with some of the awesome surf instructors and local veterans plan on continuing the momentum created on this amazing trip. We are planning to carry on the mission of Operation Surf by recruiting more veterans to come join us while surfing the waves out in Bolinas, CA. shack aaaa!!!

Thank you for supporting the active service men and women and veterans of the armed forces of the United States and our allies!”

Warhorse Scuba Inc. was founded in 2016 by John M. Gannaio and Sharon Patterson.
Warhorse SCUBA Inc was founded on the knowledge that everyday, 22 US Military Combat Veterans commit suicide. Furthermore, several studies have been conducted that determined SCUBA diving has positive affects on personnel suffering from Post Traumatic Stress Disorder, Traumatic Brain Injury, C-Spine Injuries, and other disabilities. Throughout the certification process, all participants will also be taught how to be excellent stewards of the underwater environment.

NORML’s mission is to move public opinion sufficiently to legalize the responsible use of marijuana by adults, and to serve as an advocate for consumers to assure they have access to high quality marijuana that is safe, convenient and affordable.

The VAC provides free air transportation to post 9/11 combat wounded and their families for medical and other compassionate purposes through a national network of volunteer aircraft owners and pilots.

As we all know, there is our great American Flag and one celebrating each of the five branches of our great military – the Army, Navy, Marines, Coast Guard and Air Force – and even one that pays homage to our missing in action and prisoners of war. But where is the emblem or Flag to honor the largest contingency of military people, our Veterans, both living and deceased? We, the Sonoma Veterans Memorial Park Association, are trying very hard to rectify this omission. We have created a beautiful Flag to do just that. Please help us accomplish our goal by sharing this message with your relatives and friends as well as your state and national legislators.

Outward Bound for Veterans helps thousands of returning service members and recent veterans readjust to life at home through powerful wilderness courses that draw on the healing benefit of teamwork and challenge through use of the natural world.

“My absolute goal is to help veterans in need with free seeds and “growing” support from seed to harvest. I also send free seeds to Veterans monthly though giveaways. and if you reached out to me in need I will always oblige. I will also put Vets in touch with reputable growers if they just need meds,” Thomas Berman.